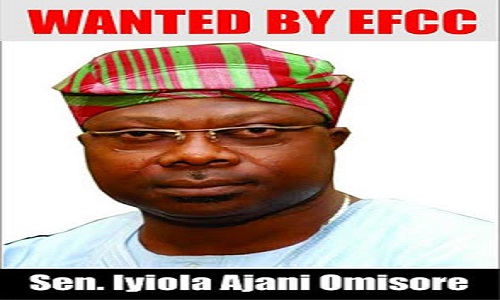 A former senator and Peoples Democratic Party, PDP, flag bearer in the 2014 governorship election in Osun State, Iyiola Omisore, has been declared wanted by the Economic and Financial Crimes Commission (EFCC).
Mr. Omisore was declared wanted on Tuesday by the EFCC for a N442, 600,000 contract awarded to a firm linked to him by former National Security Adviser, NSA, Sambo Dasuki.
The ex-senator was a director of the company when the contract was awarded and N370 million paid.
Part of the N370 million was allegedly paid into Omisore’s account.
In a statement issued by its spokesperson Wilson Uwujaren, the EFCC said the PDP chieftain went underground and refused to honour an invitation extended to him last month “to come and make clarification on the ongoing investigation”.
The commission noted that rather than make himself available on the appointed date, Omisore approached the FCT High Court to restrain it from performing its statutory functions.
Delivering judgment on an enforcement suit of his fundamental human rights, Justice Husseini Baba Yusuf ordered that the PDP chieftain should only be arrested through a due and legal process.
Subsequently, the EFCC requested and obtained a warrant to effect the arrest of Mr. Omisore.
The EFCC thereafter obtained a warrant to effect the arrest of the politician.