LIB reported earlier that a 300 level Law student of the University of Lagos named Dolapo Olusesi, was allegedly arrested and detained by the police after the Deputy Dean of Student Affairs, Dr Karo Ogbinaka, reported him to the authorities for posting a photo of him that had the inscription “I want to be dead rat” on his Facebook. 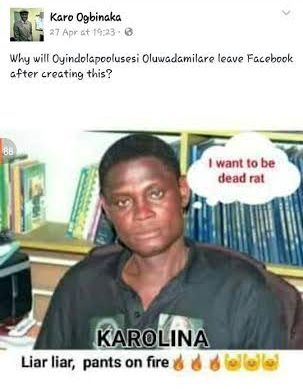 LIB reached out to Dr Ogbinaka to hear his own side of the story and this is what he had to say.

“I didn’t get a student arrested. I only reported the student that was threatening my life to the Vice Chancellor. If someone is threatening your life, what would be done? This is a homicide case. I hope you are aware. I said somebody is threatening my life. The student affairs is supposed to protect students and I am the deputy dean.. So I don’t know where I am related to being threatened in this issue that they’ll be wishing I am a “dead rat”.