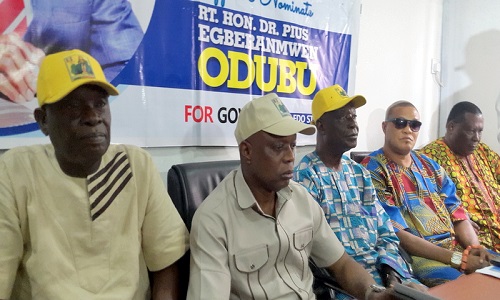 The Edo State chapter of the All Progressives Congress (APC) has sympathized with all victims of the violent attack on the gubernatorial aspiration campaign team of the state Deputy Governor, Dr Pius Odubu at Auchi, Headquarters of Esako West Local Government Area last weekend.
This is just as the party called on the national leadership of APC and the Presidency to intervene over the dangerous dimension the gubernatorial primaries in the state is assuming.
The attack left five persons, including the Guard Commander of the deputy governor’s Police team, who covered his boss when they came under gunfire from the attackers, critically injured.
While Odubu described the shooting as a targeted assassination, Governor Adams Oshiomhole dismissed his deputy’s claim as “hasty”, saying “preliminary reports suggest that the fracas was caused by thugs loyal to the Odubu Campaign imported in two truck-loads to Auchi, who attacked other party loyalists not sold to the deputy governor’s aspiration”.
The APC chair in Estako West Local Government, Alhaji Abubakar Akokhia, also dispelled the notion that the deputy governor, whose governorship ambition did not receive the blessings of Governor Oshiomhole, was targeted in the attack.
“Anybody that said the attack was directed at the deputy is a black liar. We were together inside my office. He was inside my office during the shooting.
“Nobody planned to kill the deputy governor. We agreed to host him. Who is planning to kill him? He should reduce the number of his entourage. The cars that came with him were more than 20”, Akokhia said.
The Edo APC, however, expressed gratitude to God for preventing death so far from the attack and prayed for speedy recovery for those who sustained gunshot wounds from the hoodlums.
According to Comrade Godwin Erhahon, State Publicity Secretary of the party, “We apologize to the victims and the public for the statements of some of our officials who sounded sadistic and conspiratorial in a feeble but self-indicting attempt to trivialize the near tragic incident. Their reckless and ungodly utterances do not represent the culture of APC.
“It is saddening that these heartless officials could not sympathize with those who were wounded in the attack”.
Erhahon said the very godly and peaceful conduct of the Deputy Governor is highly commended as it is now obvious that he does not move about with thugs otherwise casualties would have been recorded on the side of the attackers and that could have helped the sadists and desperadoes to turn the story against him.
“We commend all the other gubernatorial aspirants who have openly condemned the attack, particularly Mr. Godwin Obaseki.
“APC appeals to the good people of Edo South to resist the temptation of viewing the attack on their illustrious son, the Deputy Governor as an ethnic plot knowing that godly leaders from Auchi and other parts of Edo North have unanimously condemned the attack.
“We appeal to the national leadership of our great party and the presidency to rise to the challenge posed by the ugly trend in the ongoing campaign for the gubernatorial primaries of Edo APC.
“APC prays God to sanitize the hearts of all those who have vowed to rather die or kill than see any aspirant other than their choice emerge as gubernatorial candidate”.