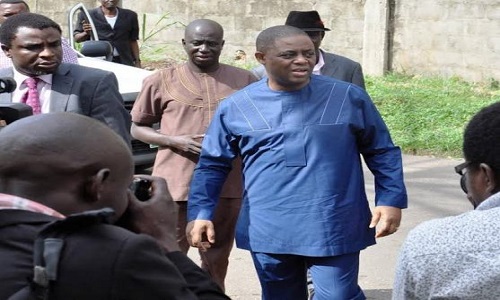 The travails of former Aviation Minister, Chief Femi Fani-Kayode continued on Monday as the Economic and Financial Crimes Commission, EFCC, obtained a court order to further detain him over a N840 million campaign fund.
The anti-graft agency had earlier secured a warrant from an Abuja Magistrate Court to detain Mr. Fani-Kayode, the former spokesperson of the Peoples Democratic Party Presidential Campaign Organisation, for two weeks.
In a bid to further hold on to the outspoken PDP chieftain while investigations continue into his alleged complicity in the slush fund of N23.3 billion provided by a former Minister of Petroleum Resources, Diezani Alison-Madueke in the build-up to the 2015 presidential election, the EFCC approached an Ikeja Magistrate Court in Lagos State.
The court granted the request of the EFCC to further detain Fani-Kayode for another three weeks though the anti-graft agency requested for one month.
Reacting to the development, the former minister through his media aide, Jude Ndukwe, described the new court order as “highly contentious”.
In a statement on Monday, Mr. Ndukwe said: “Chief Fani-Kayode’s lawyers had served the EFCC the court notices from a Federal High Court in Abuja on Friday, 20th of May, 2016, but to our consternation he was whisked to Lagos last Thursday and taken to an Ikeja Magistrate court this morning where they applied to keep him for another thirty days.
“This is a gross abuse of court processes and a denial of his fundamental human rights. It is even most shocking that EFCC attempted to take him to the magistrate court without notifying his lawyers or family members. His lawyers had to go from court to court in Lagos searching for venue of the court proceedings before they eventually traced it to Ikeja.
“This type of treatment to any citizen of our nation especially in a democratic era is, to say the least, inhuman.
“One wonders why a case already before a High Court was entertained in a magistrate court, and judgment given immediately.
“This smacks of nothing but vendetta. EFCC have no reasonable cause to continue to keep Chief Femi Fani-Kayode in their custody beyond the constitutional provision of 48 hours. He is not known to have either attempted to evade arrest nor resisted same. EFCC have since concluded their investigations by the virtue of details of the case they leaked out to the public through the press. So, they have no reason to keep having him in their custody without taking the noble option of charging him to court, after all, they have already kept him with them long enough.
“As an organisation that prides itself as a constitutionally responsible one, it is expected that holding a citizen endlessly would not be part of EFCC’s operations. If they have anything against Chief Fani-Kayode, one expects that they should charge him to court rather than obtaining contentious remand warrants from one court to the other.
“Recall that EFCC had earlier obtained a similar remand warrant in Abuja to keep him for two weeks which has since elapsed.
“This latest action by EFCC has confirmed rumours making the rounds that the federal government wants to give the former Minister of Aviation the Dasuki/Naamdi Kanu treatment, a treatment alien to our laws but is fast becoming the norm under the current administration.
“The question now is, with this naked abuse of our constitution, who is next, and for how long will this continue?”