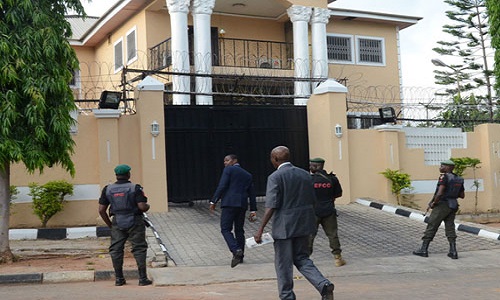 Operatives of the Economic and Financial Crimes Commission (EFCC) yesterday stormed the residence of detained former Aviation Minister, Femi Fani-Kayode in Abuja, where they conducted a search of the residence.
The ex-minister is in custody for allegedly receiving N840 million out of the N2.5billion illegally withdrawn from the Central Bank of Nigeria (CBN) and paid into the accounts of six chieftains of the Peoples Democratic Party (PDP) and the Goodluck Support Group (GSG).
The funds were reportedly pumped into the re-election campaign of ex-President Goodluck Jonathan in last year’s general election.
Mr. Fani-Kayode denied any wrongdoing, saying he did not know the source of the funds was from the CBN and that it was used judiciously by the Media and Publicity Directorate of the PDP Presidential Campaign Organization, which he headed.
Although there was no official confirmation of the search on the residence of the detained former minister, it was learnt that the development followed intelligence reports on some of the issues emerging from Fani-Kayode’s interrogation.
Raising the alarm on the search by the EFCC operatives, the Special Assistant on Media to the ex-minister, Mr. Jude Ndukwe, said it was conducted without any warrant.
In a statement yesterday, Ndukwe said: “Earlier today, the EFCC invaded the residence of Chief Femi Fani-Kayode even when he was still in their custody.
“What miffed us most was their mode of operation which was forceful, provocative and dangerous as they wielded their guns with needless threats.
”The worst is that the invasion was without a warrant as they forced their way in, and after terrifying all the staff at home, including the infant, they whisked the laundry man away even though he was later released.
“This is the fourth time the EFCC operatives would be invading Chief Fani-Kayode’s residence in just under a week.
“We condemn this act of executive lawlessness, harassment and intimidation. Chief Femi Fani-Kayode has served this country even at the highest levels and he deserves some courtesy.
“We call on the EFCC to endeavour to carry out their functions within the ambit of our laws and stop brazenly betraying the fact that Chief Fani-Kayode is under persecution. The world is watching!”