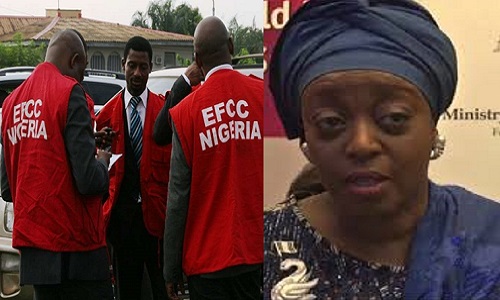 The whereabouts of N15 billion out of the N23.29 billion ($115m) allegedly offered as bribe by the Peoples Democratic Party, PDP, to Independent National Electoral Commission, INEC, officials to compromise the 2015 presidential election, has been traced by the Economic and Financial Crimes Commission, EFCC.
The EFCC has also identified four directors of four oil firms suspected of substantially bankrolling the N23.29 billion election bribery scandal while some former Ministers in the former administration arrested in connection with the scandal, were battling for bail last night.
They are: former Minister of State, Foreign Affairs, Dr Nurudeen Muhammad and immediate-past Minister of Foreign Affairs, Ambassador Aminu Bashir Wali.
The Nation, which cited well-placed sources in the EFCC, reported that the anti-graft agency had traced over N15billion of the bribe cash as follows: the Seven North-West states – N5,097,064,000; REC and five others – N681m; Cross River PDP chairman – N500m; INEC officials in Oyo and Ogun – N359m; Fidelity Bank profit of N49.7m from the deal and two politicians from South-East – N700m.
The source said: “EFCC chairman Ibrahim Magu and his crack team have gone far in tracing more than N15billion of the N23.29billion which was shared to party leaders and INEC officials in the six geopolitical zones to influence election results and to stop APC from being declared as the winner of the 2015 presidential election.
“Some of the beneficiaries have started refunding the cash given to them. We have the list of all beneficiaries from Fidelity Bank. This is one of the reasons why we kept the MD of the bank and Head of Operations in custody. Our priority is to recover the bribe cash.
“By the time we get reports from all the geopolitical zones, we would have tracked down the bribe sum. Findings confirmed that the poll bribery cash was shared between February and April 2015 in a desperate and untidy manner.
“Our concern is not about any party but the use of proceeds from stolen oil to bribe INEC officials”.
It would be recalled that the EFCC identified the immediate-past Minister of Petroleum Resources, Diezani Alison-Madueke, as the brain behind the $115million (N23.29b) election bribery scam.
Mrs. Alison-Madueke, it was, who allegedly instructed some oil barons to part with $88.35 million of the $115 million (N23.29b), while she provided the remaining balance, which was deposited with Fidelity Bank.
Besides the former minister, who is undergoing treatment for cancer in the U.K even as she is also under investigation by that country’s government, some of those quizzed so far by the EFCC in connection to the scandal are the Managing Director of Fidelity Bank Plc, Mr. Nnamdi Okonkwo; Head of Operations, Martin Izuogbe; Cross River State’s Chairman of the PDP, Mr. Ntufam John Okon (N500m); Muhammad (N500,000,000); Wali (N 950,000,000); Retired INEC staff, Sani Isa (N 406,206,000); Leno Adesanya ($1.85m); Sen. Chris Anyanwu and Mike Ahamba (N700m) each.
Others are Cross River REC, Gesil Khan for collecting N185, 842,000 out of a N681 million bribe deal; Fidelia Omoile (Electoral Officer in Isoko-South Local Government Area of Delta State) – N112,480,000; Uluochi Obi Brown (INEC’s Administrative Secretary in Delta State) – N111,500,000; a former Deputy Director of INEC in Cross River state, Edem Okon Effanga – N241,127,000 and the Head of Voter Education of INEC in Akwa Ibom, Immaculata Asuquo – N214,127,000.
Sources said last night that the ex-Ministers (Muhammad and Wali), who were taken into custody on Wednesday, have been battling for bail.
“We will grant them bail as appropriate after we may have concluded our investigation. Their counsel were mounting pressure on us for bail as at Friday but I cannot tell you the exact status now”, the source said.