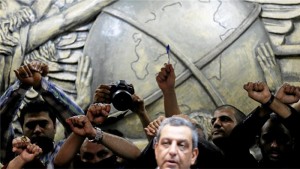 Egyptian riot police have cordoned off the headquarters of the journalists’ union and limited access to the building in an escalating standoff following a raid on the premises and the arrest of two journalists. Hundreds of journalists rallied on the steps outside the union headquarters on Wednesday, chanting “Journalism is not a crime!” and demanding the dismissal of the country’s Interior Minister Magdy Abdel-Ghaffar.

The protests are the latest in a series of demonstrations against the government of President Abdel-Fattah el-Sisi, which has banned virtually all protests and carried out a wide-ranging crackdown on dissent. Police severely restricted access, banning non-union members from entry, as well as some residents and people who came on work errands to the surrounding area. Foreign journalists were allowed entry only after approval by several levels of officers, up to the rank of general.

At one point, several dozen journalists pushed through a barrier and entered the area, causing a brief moment of chaos. Several held up their union cards, saying that the police would not let them enter despite the membership. The union is now holding a general assembly. “There are thugs here threatening us, and the police don’t want us to enter for the meeting because they know we’ll condemn the Interior Ministry,” said journalist Ahmed Bakr, who was allowed into the building’s street eventually.