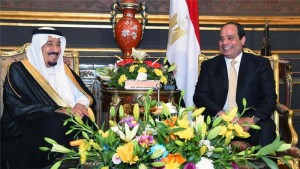 An Egyptian court on Saturday sentenced 51 people to two years in prison for protests against the handover of two Red Sea islands to Saudi Arabia, judicial officials and lawyers said. Parents and friends of the defendants burst into tears and cried out in shock after learning of the verdict outside the Cairo courthouse.

Defence lawyers Hossam al-Khadrawy and Ahmed Abdel-Latif confirmed the verdict, which they said can be appealed. Thirty-three defendants were present in the court, while the rest had been released on bail. Police had quickly dispersed protests against the islands deal on April 25 and arrested dozens of people. Prosecutors charged them with participation in illegal rallies.

The deal to hand over the islands in the Straits of Tiran had galvanised dissidents who oppose President Abdel Fattah el-Sisi. In the leadup to the protests, police already made dozens of arrests to discourage a repeat of a large rally on April 15 at which demonstrators chanted for the “fall of the regime”.

The government says the islands had always belonged to Saudi Arabia and that Egypt had merely administered them while on lease since the 1950s. Critics accuse Sisi of “selling” the islands in return for Saudi investments. Sisi, a former army chief who was elected president after overthrowing his predecessor in 2013, has been accused by activists of installing a heavy-handed regime that tolerates no dissent.