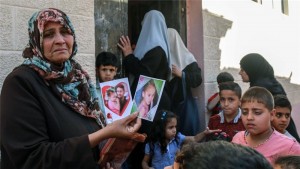 Palestinian political factions have traded accusations of blame over three siblings who were burned alive after their home was set ablaze by candles the family was using due to the ongoing electricity crisis in the besieged Gaza Strip.   Officials in the Gaza-based Hamas movement and the West Bank-base

More than 600 Palestinians came out on Saturday for the funeral of the three children, whose home was engulfed in flames a day earlier in the al-Shati refugee camp in the north of the coastal enclave. With leaders of the Hamas political organisation and local armed factions in attendance, the mourners decried the deaths of Rahaf, Yousra and Nasser al-Hendi, who were between one and four years old.

Mohammed al-Hendi, the 30-year-old father of the children, recalled his last day with his children. “We were at the beach and came home to find there was no electricity again,” he told Al Jazeera at the funeral. “They were sleeping, and I went out to bring dinner. When I came home, they told me my children were burned alive.” Dozens of relatives and neighbours came to the Hendi family’s charred home in al-Shati after the funeral to express their condolences.

Standing in the blackened remains of the half-collapsed home, their grandmother Umm Fadi sobbed heavily as she recollected the last time she saw the late children at her nearby home a day before they died. “They were so happy because we bought them clothes for Ramadan, and I cooked for them,” she told Al Jazeera. “Then they were burned to death in those clothes.”