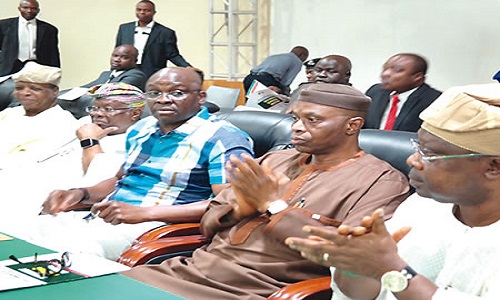 Governors Ayodele Fayose and Olusegun Mimiko of Ekiti and Ondo States yesterday put up a united front against backdrop of their rumored political feud for the soul of the Southwest Peoples Democratic Party (PDP).
This is just as Governor Fayose blamed the media for creating a false impression that PDP chieftains in the Southwest were at loggerheads in a bid to sell their newspapers.
Rumors were rife that all was not well in the camp of the PDP in the Southwest following the recent zoning of the position of national chairman of the party to the Northeast.
While the Ekiti governor had supported the zoning, Chief George a former national vice chairman of the PDP, kicked, saying it negates the party’s constitution.
Fayose went further to claim that George expressed interest in the national chairmanship position of the party to him, but that he refused to support him (George) because he was part of the old brigade of politicians in the country who have refused to vacate the stage for the youth to take centre-stage.
However, all their political differences seemed to vanish yesterday at The Dome in Akure, the Ondo State capital at a stakeholders’ meeting of PDP leaders in the Southwest summoned by Governor Mimiko.
Fayose, who surprisingly showed up at the Akure meeting after a section of the media had reported that his faction of PDP leaders in the region was holding a parallel meeting in Ijebu-Igbo, Ogun State, sat beside George.
Denying any cracks in the Southwest PDP, the governor said: “For me and Governor Mimiko, we are one and the same on party issues. Do not mind what the newspapers are saying. As for our leaders, Chief Bode George, you can see me sitting next to him on the high table; all what you read in newspapers are just sensationalism to sell them (papers)”.
“We are bound to agree whether it’s convenient for us or not when it is in the collective interest of the Yoruba race and the party. Chief Bode George will forever remain our leader in the PDP. We are ready to speak as one indivisible members of the same PDP”, he added.
At the Akure meeting, Fayose reiterated his commitment to the unity of the party in the zone and Nigeria, with a pledge not to do anything that would jeopardise the chance of the party in future election.
“I want this great party to regain its leadership position and to remain solid”, he said.
Fayose, who openly embraced Chief George before the commencement of the meeting, also vowed an unrelenting criticism of the present administration in the country until the dividend of democracy was delivered as promised by President Muhammadu Buhari and his party – All Progressives Congress.
Speaking on the occasion, Governor Mimiko stressed the need to put the PDP house in order and unite all the leaders ahead 2019 general election in the country.
He added that the Akure meeting became important when “it seems the party in the South-West was drifting and there were cacophony of voices. This is the time for the South-West to speak as one in the interest of the region, our people and our heritage”.
The governor stated further that “this is the time to get our acts together and take our rightful position in the politics of the country. There is no alternative to our unity in the South-West.
“There is no doubt about it that Nigerians are waiting. If we mess it up, a new party will emerge and become the darling of this country. We need to realise our position today. If the purpose of politics is to serve the greatest interest of the people, this is the time to come together in the South-West”.
“I want to thank my brother, Governor Ayo Fayose. Both of us have resolved that in the interest of Yoruba nation, we are coming together”, he said.