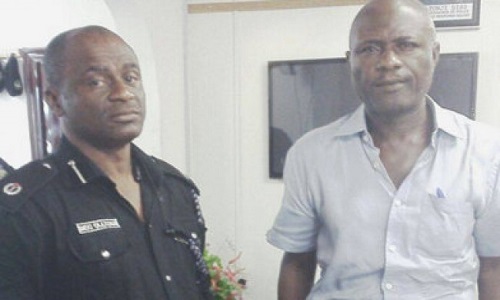 Friends of Lekan Shonde, the man accused of allegedly killing his wife, Ronke, in a domestic violence dispute five days ago, has finally surrendered to the police.

This is just as friends of the suspect, who claimed to have known him for over 30 years, rallied round him, describing him as a non-violent and easy-going man who loved his late wife dearly.

Mr. Shonde, a dock worker, reportedly fled his Egbeda residence Friday morning after allegedly beating his wife to death on Thursday night. He allegedly also locked their two kids in the house with her body.

After speaking from hiding, where he claimed innocence of his wife’s death and threatened to commit suicide, Shonde, who was said to have moved from Cotonou, Benin Republic to Badagry and Ondo State before he was finally convinced by his friends to return to Lagos on Sunday night.

It was gathered that Shonde’s friends took him to the office of the Commander of the Rapid Response Squad (RRS), Tunji Disu, an Assistant Commissioner of Police (ACP), from where he was transferred to the police headquarters at Ikeja GRA. 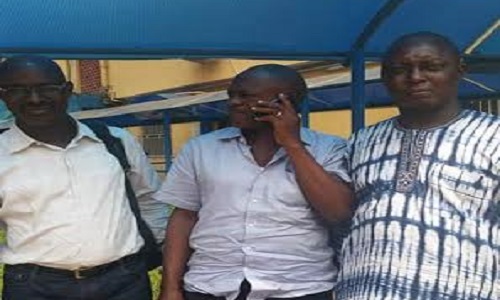 It was also learnt that the police recovered the late Mrs. Shonde’s phone from her husband, who had earlier denied having the phone in his possession.
Although the police shielded Shonde from reporters, his friends, Sunday Nwobi and Gbenga Sholuki, who stood by him, described the suspect as non-violent, adding that he loved his wife so much that he allowed her to keep the family’s account.
“At the moment he has nothing because even the money he makes was kept in an account the wife has access to. Even the ATM card is with her. Everything was under her. That’s how much he loved her”, they claimed.
According to Nwobi, the suspect’s friend for 33 years, they both attended Ikeja High School, but he was a class ahead of Shonde.
“He has never been violent. I have known him for the past 33 years and I can tell you that he is a gentleman. He was in the same class with my immediate younger brother who has just returned from the United States because of this matter.
“He attended Ikeja High School. I have been in touch with him since the ugly incident and he sent me over 70 messages threatening to commit suicide.
“He told me he had quarreled with his wife on alleged infidelity. He said his wife confessed she has a man friend in her work place.
“Lekan told me that he caught his wife talking to the man on phone and that she went to Abuja with her lover and they spent five days together.
“As the wife was confessing and begging him, he said he pushed her aside and went into the room to sleep. That he didn’t talk to her nor touch her because he was angry.
“Since he usually left the house early (5am) for work every day and returns around 8pm, he said he left that day as usual and that their eight-year-old son was the one who bolted the door, while he used his own key to lock the gate as usual.
“Lekan told me that he never knew anything has happened to his wife until he was called by his landlady on phone. That his landlady told him his wife had died and that he was a suspect. He said his landlady’s daughter also called him.
“He was on his way to the house but different people called and told him to run because police were in his house and they were looking for him as the suspect. That was why he fled.
“But as soon as he contacted me that same day, I kept telling him to come out. His aged father also told him to turn himself in and allow the law to run its course”, he said.
Some of the text messages the suspect sent to Nwobi on May 7 read: “I want to die. Please help me, I can’t face the police or cell. They will kill me”.
Other messages he sent to Nwobi, including that of May 9, thanked him for being a true friend.
“Morning Senior Sunday, thanks for everything. I want to go to Alausa. You are the only one that advised me not to kill myself. I will respect you till I die”, he said.
Sholuki, Executive Director, Campaign against Impunity and Domestic Violence, said he came out for Shonde because he believes in him.
He said: “Even as we were coming to the police command, he has spoken with his mother-in-law to notify her that he has surrendered. The woman told him that he has done very well for her family and that though they were pained, they have forgiven him and he should not think of suicide again.
“He also called his wife’s lover and told him he hoped he was happy now that he has destroyed his home. The man begged for forgiveness.
“When information came to us about what happened, we told him to come out for the law to take its course. We have known him for a long time and he is not a violent person.
“We want justice. We are demanding a medical examination to ascertain what really happened. He is a family man. He cherishes his wife and says very pleasant things about her. All we want is justice. If scientific evidence proves he killed his wife, then, he should go in for it. But what we do not like is his being condemned even before autopsy result comes out”.