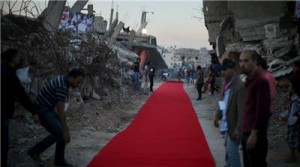 The second annual Human Rights Film Festival is underway in Gaza, bringing a measure of glitz and glamour to a city that continues to be under Israeli siege. While the Hollywood elite are turning on the glamour at the Cannes Film Festival, this modest and very different festival is a break from everyday routine for the people of Gaza. “The idea here is to let residents of Gaza, where there are no functioning cinemas, experience a little cinematic escapism,” Al Jazeera’s Mohammed Jamjoom, reporting from the festival, said.

“Attendees of all ages, so tired of conflicts and embargoes – were clearly happy to get a chance that doesn’t often come their way,” Jamjoom added. Organisers say the event is meant to give the people of Gaza a chance to feel at peace, however momentary it may be. “The slogan, the hashtag of our festival is in Arabic “Badna Nitnafas” – which means in English “we want to breathe, we want to breathe air, we want to breathe freedom,” said Saud Aburamdan, one of the organisers of the festival.

“The event is also intended to send a message to the world that Gaza is not a city of “terrorists” but a city of people who love life,” Aburamdan added. “Gaza has another face, another beautiful face. The Palestinians in the Gaza Strip love life, they are not terrorists – they also can go and watch a movie.” Over the course of four days, 70 films are scheduled to screen, among them narrative features, documentaries and shorts, all free to the public.

While the Cannes festival may be getting all the headlines, the film fans who came out on the first night of the Gaza event said that their version, which is certainly not nearly as flashy, is, to them, just as special. Gaza resident Maysa Al-Atrash said: “I’m excited. I like an event like this, activities for me and my kids, a cultural event.”