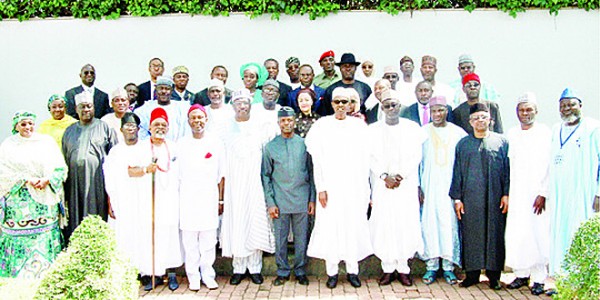 Two days to his first anniversary in office as President of the most populous black nation on earth, President Muhammadu Buhari has asked Nigerians to gauge the performance of his ministers and whether he should make changes.
President Buhari, who has had a slow start to governance with Nigerians fast losing patience, appointed ministers in September last year but it was not until November, before he assigned portfolios to them.
Speaking during an interview session with select journalists at the Aso Rock Villa in Abuja yesterday, Buhari said “I am waiting for the newspapers to tell me the performance of my ministers and whether I should make changes” in response to the question if Nigerians should expect changes in his team on the first anniversary of his administration.
The president, who explained why his government took off rather slowly, said former President Olusegun Obasanjo with experience in hand over and take over, recalled that in 1999, outgoing Head of State, General Abdulsalami Abubakar made each ministry to prepare handing over notes and then brief the president-elect, for him to choose what he wanted out of it.
Sharing his personal experience with the immediate past administration, Buhari said former President Goodluck Jonathan agreed to do the same and asked all his ministers to prepare handing over notes and brief him (Buhari) as president-elect then, but a last minute protest that he should not be allowed to take over the government before he was sworn-in, scuttled the move.
As a result, President Buhari said no proper transition took place and after his inauguration, he had to take briefings from two ministries a day in order to make up for lost time.