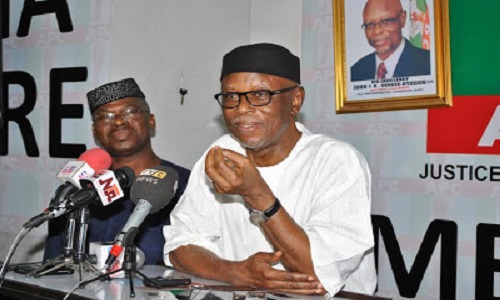 The National Chairman of the All Progressives Congress (APC), Chief John Odigie-Oyegun, yesterday, said that because of the strategic position of Edo State, the party must retain the governorship seat come September 10, 2016.
Edo people go to the polls on September 10 to elect a new governor to succeed Adams Oshiomhole of the APC, who is about completing his two terms of eight years.
The governorship election will also be a test of popularity between the APC and Peoples Democratic Party, PDP, which controls all the states in the South-south with the exception of Edo.
The importance of the state to the APC was stressed by Odigie-Oyegun when he said “It is very necessary to emphasise the fact that for us, it (Edo State) is a critical state strategically. I hope I would not be misinterpreted if I say it is also a must-win state”.
He was speaking at the party’s national secretariat in Abuja, while inaugurating the Prince Olagunsoye Oyinlola-led APC Fact-Finding and Reconciliation Committee.
He said the “challenging assignment” given to the committee was to arrest “the unfortunately deteriorating situation in Edo State by restoring peace and coming out with suggestions that would make the party become a dependable political force, ready to win in a free and fair election”.
He also tasked the committee to inform all the governorship aspirants of the party’s commitment to providing a level playing field and organising free and fair primary poll on June 18.
The APC national chairman, a former governor of Edo, said the cases of intra-party disputes in the state were disturbing, adding that the disputes threaten development in the state which suffered neglect under the PDP-led government.
The ranks of the APC in Edo has recently been divided over allegations that the outgoing governor was planning to install his preferred candidate as his successor.
The deputy governor of the state, Dr Pius Odibu, who is also interested in succeeding the governor, recently alleged that he was nearly assassinated and over a week after, another governorship aspirant and rumored anointed candidate of Gov. Oshiomhole, Godwin Obaseki, was also a victim of attempted assassination in the state.
“We will not go back on the need for free and fair primaries, which mean that the party itself must be as neutral as possible.
“So, this is the message I want you to go with and to do everything that you can to arbitrate on matters in the state”, Oyegun said.
In his response, Oyinlola, a former governor of Osun State, thanked the party for reposing confidence in the committee and promised to carry out the assignment “diligently without fear or favour”.