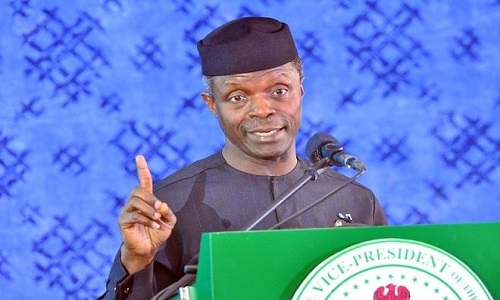 The sum of over N1.4 trillion, which could have been used to the immense benefit of Nigerians, was looted by just 55 Nigerians within a space of seven years, Vice President Yemi Osinbajo (SAN), disclosed on Tuesday.
Giving a shocking analysis of the opportunity cost of corruption, Osinbajo said only a third of the looted money – some half trillion naira – could have favoured large swathes of Nigeria, build roads, put children in schools and families in homes instead of lining the pockets of looters.
“Using World Bank’s rates and costs, one-third of this stolen sum could have provided 640km of roads”, the vice president noted. That’s roughly the distance between Abuja and Sokoto.
The money could also have built “36 ultra-modern hospitals (one per state), built and furnished 185 schools, educated 4,000 children from primary level all the way to their tertiary education (at N25 million per child), and also built 20,000 units of two-bedroom houses”, he added.
Osinbajo spoke at a stakeholders’ dialogue on corruption, organised by Transparency International and its local contact, the Civil Society Legislative and Advocacy Centre (CISLAC).
Vice President Osinbajo’s analysis of the opportunity cost of corruption comes exactly one year after President Muhammadu Buhari launched his administration’s anti-corruption drive.
In his address, delivered by Femi Odekunle, renowned Professor of Criminology and member of the Presidential Advisory Committee Against Corruption, the vice president said corruption-related offences have dominated 80% of media-reported crimes since 2006.
“Out of top 10 global corruption enforcement cases of all time, Nigeria is actively implicated”, said Osinbajo.
“The famous Panama Papers…revealed the criminal exploitation [by] prominent Nigerians”.
The vice president backed the stance of the dialogue, to negotiate space for state and non-state actors to fight corruption.
He particularly suggested non-government groups to demand accountability and transparency from elected and appointed officials across all tiers of government.
“Demand must be for routine publishing of budget allocations, public projects and creation of a public register where owners and beneficial owners to every asset in the country can be disclosed”, said Osinbajo.
The vice president also charged non-governmental groups to unite in exerting pressure on government to ensure public and private officials engaged in corrupt practices resign their positions, make restitution and face stipulated sanctions.
CISLAC, which works with Transparency International in Nigeria, have repeated calls for open budgetary process and disclosure of public spending in the wake of a Transparency report into murky military and defence spending.
Similarly, following the Panama Papers’ leak, the group called for names of beneficiaries of every asset in the country to be made public.
“The fight against corruption has never been higher on the agenda of Nigeria”, said CISLAC chairperson, Yunusa Ya’u.
“However, there is no doubt that for the current anti-corruption drive to be effective and sustainable, there is need for a framework of coordinated action that recognizes the role of all stakeholders – both state and non-state actors”.
Ya’u noted sustaining anti-graft efforts depends on institutions effectively preventing and enforcing anti-corruption standards.
“These institutions need to enjoy independence from political interference and be adequately resourced, in terms of personnel, financial and material resources, to fulfil their mandate”, he said.