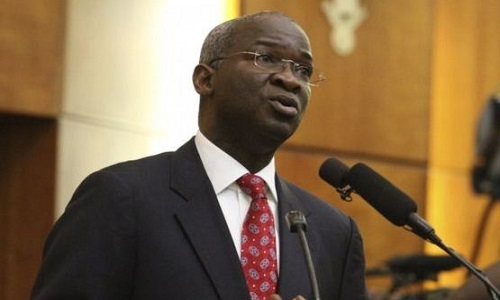 The Minister of Power, Works and Housing, Mr. Babatunde Fashola (SAN), Tuesday denied a comment attributed to him while he was Governor of Lagos State that he could fix Nigeria’s decades of poor electricity supply within six months, if given the chance.
Speaking during a network programme of the Nigerian Television Authority, NTA, yesterday, the minister urged those crediting the statement to him to stop peddling falsehood.

Fashola, who was appointed minister last year by President Muhammadu Buhari based on his antecedents and record as Lagos State Governor for eight years, challenged anyone with a video clip of where he had boasted that he could provide regular electricity to Nigerians within six months to publish such.
According to him, he had only promised then that he could supply a community in the Lekki area of Lagos with power from an Independent Power Project in the state within six months with the permission to do so.

“I have heard that I said that electricity problem will be solved in six months. I have never made the statement. Anybody who has a video of where I said this should please make it public. The point I made was when I was handing over the Lekki IPP because we had about 10 megawatts of power there”, he explained.