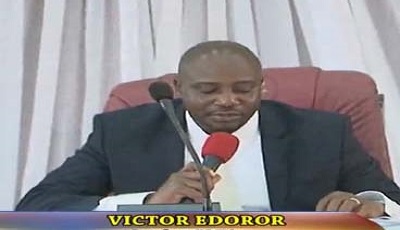 A leadership crisis is presently brewing in the Edo State House of Assembly as the embattled Speaker, Victor Edoror, has dismissed his purported impeachment on Tuesday, insisting that he remained the Speaker.
It was earlier reported here that 16 members of the House signed the impeachment notice for Edoror and his deputy – Bright Osayande – while Elizabeth Ativie and Justin Okonobo were immediately elected as their replacements respectively.
Speaking shortly after plenary with six other lawmakers in attendance, Edoror claimed that only 11 lawmakers were at the sitting that impeached him.
The Edo State House of Assembly comprises 24 members and to lawfully impeach the Speaker or the deputy, at least 16 members would be required to sign the impeachment notice.