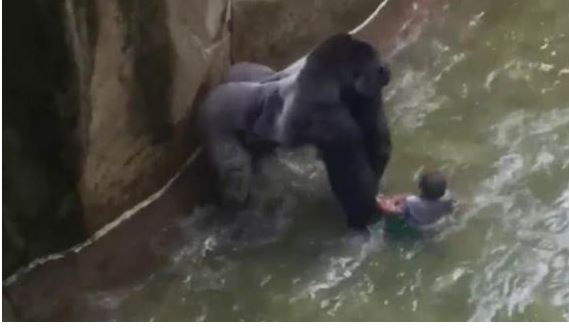 The director of the Cincinnati Zoo where a rare gorilla was shot and killed (read previous story here and here)  on Saturday after a 4-year-old boy slipped into its enclosure has said if put in the same situation again, he will kill the animal to protect the life of the child despite outcries from Animal rights activists, lawyers & wildlife conservationists over how the animal was shot.
Cincinnati Zoo Director Thane Maynard said he stands by the decision to kill 17-year-old silverback Harambe to save the child.
According to Maynard, those criticizing the zoo officials for killing the animal “don’t understand silverback gorillas,” Maynard said in a news conference on Monday. And, they were not there when it was time to make the crucial decision.
“That child’s life was in danger. People who question that don’t understand you can’t take a risk with a silverback gorilla — this is a dangerous animal,” he said. “Looking back, we’d make the same decision. The child is safe.”
Zoo director Maynard has refused to blame the family for what happened.
“We had a very difficult situation and we made a difficult call at the end. I’m not here to point fingers about fault,” he said. “We live in the real world, we make real decisions. People and kids can climb over barriers. We work hard to make sure this zoo is safe. People can climb over barriers, that’s what happened.”
“The barriers are safe. They exceed any required protocols. The trouble with barriers, whatever the barrier is, some people get past it,” he said. “The zoo is not negligent.”
Meanwhile the family have thanked the zoo in a statement through a public relations firm:
“We are so thankful to the Lord that our child is safe. He is home and doing just fine. We extend our heartfelt thanks for the quick action by the Cincinnati Zoo staff. We know that this was a very difficult decision for them, and that they are grieving the loss of their gorilla. We hope that you will respect our privacy at this time.”
Source: CNN
AdvertisementABUJA DOCTOR REVEAL THE UNIQUE WAY TO PERMANENTLY CURE WEAK ERECTION, SMALL AND SHAMEFUL MANHOOD AND INFERTILITY ISSUES WITHOUT SIDE-EFFECTS WITHIN SHORT PERIOD!! DON'T BE A VICTIM!! Click Here for More Details