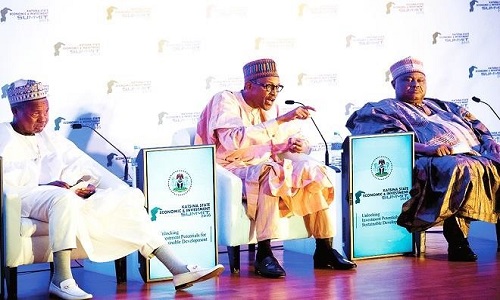 President Muhammadu Buhari yesterday in Katsina strongly reiterated his resolve to ensure that Nigeria remains one, no matter the level of agitation from any region or group to the contrary.
To underscore his resolve, the president said he was ready to defend the unity of Nigeria with his life.
Leader of the secessionist group, Indigenous People of Biafra, IPOB, Nnamdi Kanu, is currently standing trial for treason at the Federal high court in Abuja.
The president noted with nostalgia that over two million Nigerians died during the civil war to ensure the unity of the country between 1967 and 1970, and those losses would never be in vain.
“A few individuals who were not even born at the time of the war are now out agitating for secession. I fought in that war to unite Nigeria and there is no way I will allow such to happen while I am alive. I will not take it lightly with anybody agitating for self-secession. I am ready to die defending this country. I cannot fight for the unity of this country and somebody just comes out overnight and chases me out of it. That is not possible”, said Buhari at the palace of the Emir of Katsina, Alhaji Abdulmuminu Kabir Usman, as part of the activities of his official visit to the state.
He continued: “In the civil war of over 30 months, with two million lives lost, I slept and crawled at yam farms. Many people died of hunger but recently a few individuals are calling for split. This war was fought to unite the country because as at then there was no oil. We fought for the nation’s indivisibility, so let’s do it, the agitation is been taken too far, the damage done is too much and we will not take it anymore”, he said.
Buhari said the past 16 years in the history of the country were not fully utilized, given the abundant resources, adding that people must exercise patience and bear with the present administration on the predicament of low financial resources accruing to the government.
He, however, added that leaders at all levels must work closely to see how to salvage the situation, noting that his administration would do its best to uphold the trust bestowed on it and all those who have questions to answer in the mismanagement of the country in the past would be made to account for their deeds.
Earlier, the Emir urged the president, an indigene of the state, not to relent in his effort to fix Nigeria, saying “I have confidence that Nigeria will become a great country under your leadership”.
Alhaji Usman said Nigerians had been clamouring for change for many years and now that the country has got someone who is willing to fix things right, Nigerians should not be in a hurry to feel the change overnight.
“Nigerians should understand that it will take Buhari some years to fix this country. All he needs from Nigerians is prayer and patience”, he said.
“I want state categorically that the Katsina emirate council and the people of Katsina are solidly behind you. You success is ours and your failure is our failure. We will go to the extra mile to defend you, support you and promote your government”, he said.
The Emir also accused the immediate past administration of Goodluck Jonathan of abandoning the contract for dredging of River Niger noting: “inland water way is the wealth of the nation and these people don’t want it here”.
Usman, who urged residents to intensify prayers for the president, said there are enemies within and outside.
“We know there are saboteurs but we will finish them with prayers”, the Emir said and requested for the renovation of dams in the state so as to boost irrigation farming and water supply.