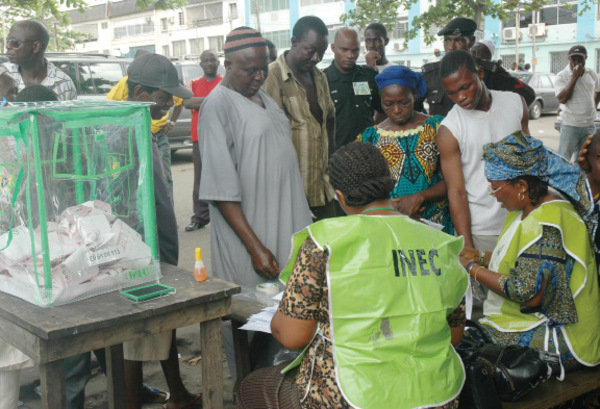 Saturday’s bye-election into Nasarawa/Toto Federal Constituency, Nasarawa State, has been declared inconclusive by the Independent National Electoral Commission, INEC, due to cancellation of votes as a result of over voting.
The seat became vacant following the demise of All Progressives Congress Reps member, Musa Baba-Onwana on March 17, 2016.
Declaring the bye-election inconclusive on Sunday in Nasarawa LGA of the state, the Constituency Returning Officer of the election, Wilfred Uji, cited Section 53 of the Electoral Act, which gives the commission the power to cancel elections in polling units where there is over voting.
“For Nasarawa/Toto federal constituency, we have a total number of 202,338 registered voters for the election out of which 76,475 were accredited and the total vote cast was 75,826 and we have 74,848 valid votes and the rejected votes stand at 978.
“The cancelled votes taken from the vote cast stand at 39,150 and the four political parties that participated at the bye-election scored the following votes, APC scored 46,559; PDP scored 17,068; APGA 11,181 and Labour party (LP) got 40 votes.
“The marginal difference between the APC and PDP is 29,491, and the cancelled votes is 39,150, so the cancelled votes exceeded the marginal difference between APC and PDP as a result of over voting in some polling units of the constituency.
“Based on the relevant laws guiding the commission, we hereby order for a rerun in the affected polling units on Wednesday, June 1 in order to get a winner and such decision has been taken in the interest of peace”, said Mr. Uji of Federal University, Lafia, Nasarawa State.
Also speaking, the Supervising Resident Electoral Commissioner for the election, Habu Zarma, urged the stakeholders of the political parties to cooperate with the commission in order to have a peaceful rerun.
“The rerun will just serve as a second chance for the electorate to choose a leader of their choice and we hope that a winner will be declared during the rerun election”, he said.
While speaking with journalists, Mohammed Musa and Ayuba Wandai, the Sole Administrators of Nasarawa and Toto local government areas of the state, respectively, expressed optimism that APC will emerge victorious at the conclusion of the rerun election.
They, therefore, called on the supporters of the party to remain peaceful, law abiding and come out en masse to vote for the APC candidate, Arc. Ibrahim Jafar, during the rerun election.