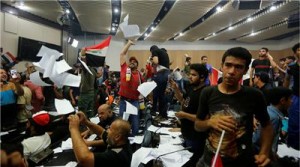 A state of high alert has been declared in the Iraqi capital Baghdad after protesters broke into the fortified Green Zone and stormed the parliament building, shortly after politicians again failed to approve new ministers. Saturday’s development was the climax of weeks of political turmoil in Iraq that has seen MPs hold a sit-in, clash in the parliament chamber and seek to dismiss the speaker, halting efforts by Haider al-Abadi, the prime minister, to replace party-affiliated ministers with technocrats.

The unrest also coincided with a blast that targeted Shia pilgrims near Baghdad, killing at least 23 people.  The Green Zone is the most secure part of the Iraqi capital, housing the parliament, the prime minister’s office and embassies. “You are not staying here! This is your last day in the Green Zone,” shouted one protester as thousands broke into the central Baghdad area.

Protesters, many of them supporters of Shia cleric Muqtada al-Sadr, attached cables to the tops of heavy concrete blast walls that surround the Green Zone, pulling them down to create an opening, television footage showed. They then headed to parliament, where some protesters ran around the building and broke into offices, while others shouted “peacefully, peacefully” and tried to contain the destruction, an AFP news agency reporter at the scene said.

Security forces were present but did not try to prevent the demonstrators from entering the parliament building, the reporter said. Protesters pulled barbed wire across a road leading to one of the exits of the Green Zone, effectively preventing some scared lawmakers from fleeing the chaos. Protesters attacked and damaged several vehicles they believed belonged to parliamentarians, sources told Al Jazeera.