Home Metro News It’ll Take A While For Buhari To Clear Up The Mess –...
Facebook
Twitter
WhatsApp 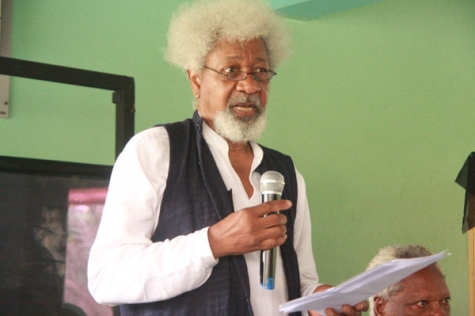 In his opinion, it may take a while to lessen it even as he charged the President Muhammadu Buhari-led federal government to sustain efforts at improving the economy.
The Nobel Laureate spoke against the backdrop of President Buhari’s one year in office on Sunday, May 29.
Soyinka, who spoke from Johannesburg, South Africa, where he is scheduled to speak at a public lecture with the theme “Politics, Culture and the New Africa”, noted that Buhari has a lot of work to do in clearing up the mess left by the past administrations in the country.
He said: “This administration has inherited a heavy baggage. While I am critical in some aspects of the priority, I think that to clear up the mess left by previous administrations is going to take quite a while especially in the sector of economy.
“So I don’t use words like optimism or pessimism, I’m just pragmatic. I look at what there is on the ground and of course wherever I can intervene, I do both privately and publicly”.