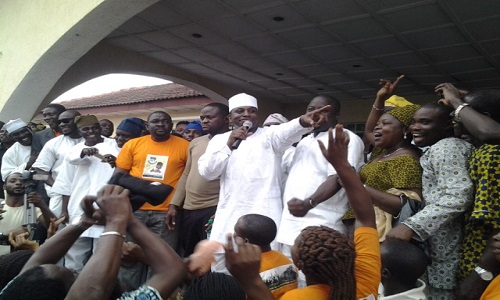 A former Speaker of the House of Representatives, Hon. Dimeji Bankole, has said that godfatherism cannot be completely erased from Nigeria’s political arena.
He spoke Thursday while delivering a lecture at the Olabisi Onabanjo University, Ago-Iwoye, with the theme, “Tertiary Education: The Pathway to Sustainable Development”.
Mr. Bankole said having a godfather is not bad as having the wrong one.
“Many people would say the youngest Speaker in Nigeria but many didn’t know that I have been in politics for 15 years before I became the Speaker”, he said.
“I was following my old man and other politicians right from the younger age where I learnt grassroots politics and I learnt very well and when the opportunity comes, I was ready for it because opportunity will only favour those who are prepared”, Mr. Bankole added.
He said Nigeria’s future has suffered from bad leadership and called on the youth to always be cautious of those they pick as their political mentors, saying power is not attained on a platter of gold.
“It is hard, it is tough to stop godfatherism. I am using my father’s name to uplift myself. He is my mentor, and I have been following him to political meetings 15 years before I rose to speakership position. I learnt politics from grassroots, so when time and opportunity came I was ready. What I know is that before you chose a godfather, identify your mentor, watch the character of your mentors”, he said.
“Power is never given, but you have to grab it. To get power nobody will give it to you, but you snatch it, and there must be qualities in you to also attract such”.
The former Speaker said Nigerians should be corrupt-free in positions they find themselves, saying under his leadership, the House of Representatives was able to compel government ministries and agencies to refund about N1 trillion of unspent budget.