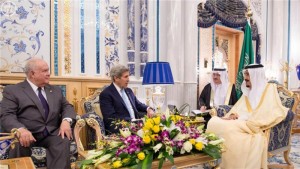 US Secretary of State John Kerry has met Saudi Arabia’s King Salman in Jeddah to discuss the fragile truce in Syria, before he took off for broader talks with Russia, Iran and other countries in Vienna. Kerry said after the talks on Sunday that he hoped to strengthen a “cessation of hostilities” agreement between Syrian government forces and rebels, which has been undermined by fighting in some areas.

On Tuesday, the US and Russia will co-chair a meeting of the International Syria Support Group, which includes Arab League and EU countries as well as Turkey, Iran and China. “On Syria, the secretary provided an update of the situation on the ground following last week’s reaffirmation of the cessation of hostilities,” a US spokesman said on the meeting, according to the AFP news agency.

The monarch discussed “aspects of cooperation between the two countries and developments in the region and efforts in that regards,” SPA reported. The US, Saudi Arabia and some other Western and Gulf Arab states plus Turkey back rebels fighting to remove President Bashar al-Assad, who has military support from Russia and Iran.