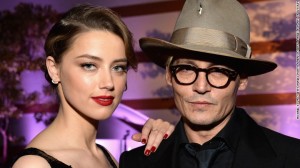 This year has brought along mixed fortunes for Celebrity marriages and Johnny Depp’s is seen on the other flank bearing misfortunes.

A Los Angeles judge on Friday issued Amber Heard a temporary restraining order against her husband, Johnny Depp, 52, over allegations of physical abuse.

The actor’s 15 months marriage is about to hit the brick as he has been ordered to stay away from his wife, Heard.

In Heard’s complaints, Depp has been both verbally and physically abusive during the entirety of their relationship. The actress backed up her claim with pictures of her bearing bruises on her face inflicted by Depp.

Depp has filed a memorandum of points and authorities in which he rejected Heard’s claims of domestic violence.

It is also reported that Depp’s movie ‘Alice Through The Looking Glass’ opened on Friday but calls were made on social media clamouring to boycott the film because of Heard’s allegations.