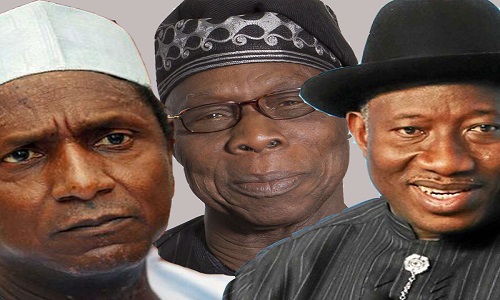 Ex-President Olusegun Obasanjo on Monday said until Nigeria embraces the culture of continuity, the country would continue to grope in the dark while laying the blame on the nation’s lopsided constitution.
“The problem of Nigeria is not the constitution”, Obasanjo argued adding “there is no constitution that is perfect in as much as it is written by human beings”.
The former president, who was the guest speaker yesterday at the third Covenant University International Conference on African Development Issues (ICADI), said there are certain things he would love to change if he had the opportunity to rewrite Nigeria’s constitution.
The conference was themed: “Driving Inclusive and Sustainable Development in Africa: Models, Methods and Policies”.
Mr. Obasanjo stressed that the major problem in Africa is leadership, noting that Nigeria is not an exception.
“This is why I continue to say that if there is nothing we have got right since 56 years of our existence, then there is no need for our existence as Nigeria”.
Obasanjo, whose lecture was titled: “What is Right With Africa?” identified Nigerian problems as leadership and corruption, saying that the administration of former President of Goodluck Jonathan was corrupt, and that the administration of his successor the late Umar Musa Yar’Adua, jettisoned his plan for continuity.
Obasanjo recalled that his successor, the late Yar’Adua, campaigned for continuity after him but when he won elections and was sworn in as president, he (Yar’Adua) jettisoned this and some of the things his (Obasanjo) administration put in place.
The former president also expressed concern over the profligacy displayed by the National Assembly with respect to the offensive amount spent on car purchase, wondering if this was constitutional.
“‎The purchase of cars by the Nigerian senators is absolute nonsense, after being given money for cars and house allowances‎, yet they still appropriated special funds for car purchase”.
Obasanjo also appealed to Nigerians to give President Muhammadu Buhari a benefit of the doubt, saying up till now, he only knows him as a principled man.
“PMB served under me and I know him a little bit. He hasn’t deviated from what I knew him for. Actually he is not a perfect man, indeed no leader can be perfect.
“Buhari might not be grounded in both the economy and foreign affairs, he is doing well in fighting Boko Haram and in his anti-corruption crusade. I am very optimistic as far as Nigeria is concerned because we have somebody that will do it well as president”, he said.
The keynote speaker, Prof. Joy Ogwu, who is Nigeria’s Permanent Representative to the United Nations, said Nigeria cannot have development in isolation of security, saying 85 per cent of the security agenda of the UN is on African countries.
Ogwu also said Africans owe themselves a duty to address their various developmental challenges.