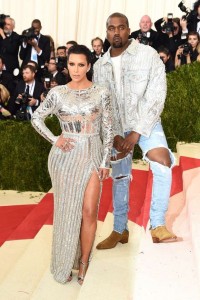 After Kanye West and Kim Kardashian made a stir-causing appearance at the MET Gala which took place in New York on Monday, May 1, 2016, the couple has now been named the Best Dressed at the annual event by  Vogue.

The reports reveal that the rapper is excited and proud of the fact that himself and his reality star wife, have been named MET Gala’s Best Dressed Couple.

In line with the theme, Kim had turned up in a custom, metallic Balmain dress, looking like a sexy robot while Kanye had shown up in torn pants, a crystal-studded denim jacket, blue contacts.

“Together the Kimye effect was nothing short of dazzling.”

Very early this morning, Kanye couldn’t help but draw attention to the article on Twitter, writing, “I’m really excited to get our first best dressed at the met … This Gala is like the Grammys of style!”