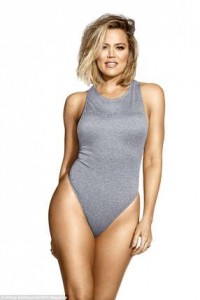 Superstar reality TV personality, Khloe Kardashian has shared a brutally honest tale of her unsavory high school experiences and her struggle with education in general.

Suprisingly, Khloe had not been a popular kid like her sisters, Kourtney and Kim Kardashian, a fact she revealed in a post she shared via her website, KhloewithAK.com, titled, “XOXO: All About My Education.”

Khloe also shared a bunch of old photos showing her looking fat as a kid and nothing like the sexy siren she has grown to become.

Writing on the issues she had faced, Khloe said:

“My education didn’t follow a traditional trajectory, but I’m thankful for my parents who listened and supported me when I was having trouble. I know you’ve been curious about this (it’s one of the top questions Googled about me, apparently), so here are the ABCs of my education!

“I went to Marymount in ninth grade, while Kourt and Kim were there, but after they left, I felt like I had no one to be with.

“I struggled really hard in school, so I took myself out of Marymount and forged my parents’ names to enroll in Alexandria Academy. My dad was livid when he found out, and I was so scared, I was shaking.

“He told me, “I’m so pissed, but the fact that you put so much effort into all of this … I’m going to let you do this. But you have to keep a certain GPA.

“Alexandria Academy is not at-home, you go to a school, and there are tutors that give you individual attention. I needed that. I really did not know one person there. I knew college wasn’t for me, and I graduated from Alexandria with honors—which I never would’ve done in a traditional school.”

Khloe also admits that, after the initial struggle had been made easier, it still had been difficult living in the shadows of her big sisters.

“While I loved having my built-in group with Kim and Kourtney, it was hard for me at times. They may have already graduated when I got to school, but I remember that teachers would always exclaim, “You’re THEIR sister?” I didn’t have my own identity and was compared to them. Kim and Kourtney were so popular.

“I didn’t care about being popular in school, and was nice to everyone. If you were a loner I was like, “Come and sit with me!

With this educationally tell all, we definitely understand Khloe’s obsession with working out and keeping fit, and she sure is making headlines of her own this days.