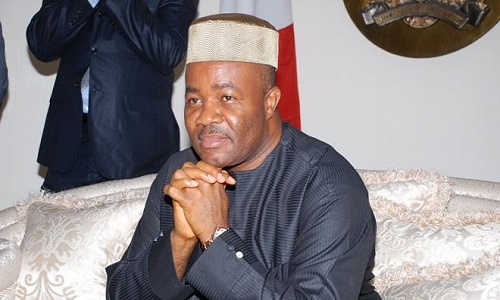 The Abia State Government has given the Senate Minority Leader and ex-Governor of Akwa Ibom State, Godswill Akpabio, knocks over a comment credited to him that Abia pioneered kidnapping for ransom business in the country.
The government said that Akpabio’s claim was “erroneous and misleading”.

The senator was said to have made the claim during plenary on Wednesday while contributing to the debate on Joint Committee Report on Police Affairs, National Security and Intelligence.

Reacting to the claim, the Chief Press Secretary to Governor Okezie Ikpeazu of Abia State, Godwin Adindu, said that Akpabio was trying to re-write history.

“This declaration by the Distinguished Senator is an attempt to re-write history whilst history remains constant. The most anti-human crime of kidnapping in all its ramifications, either for ransom or as a form of protest, remains a child of the Niger Delta. It was born and nurtured in the Niger Delta. Its roots go deep into the creeks.

“Kidnapping in other places was an off-shoot of the failure of the management of the Amnesty Programme, when non-indigenes who were recruited to the barter trade of oil in exchange for arms and hard currency were excluded from the national amnesty programme.

“The creek warlords had long started kidnapping for money before President Umaru Yar’Adua introduced the pacification and rehabilitation programme”, Adindu said in a statement on Friday.