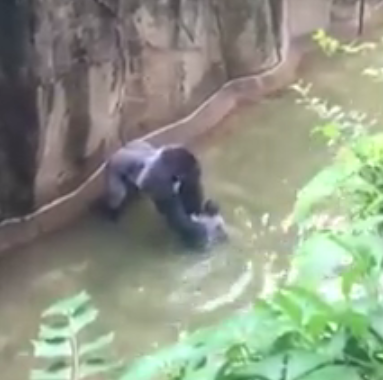 The killing of a gorilla at the Cincinnati Zoo on Saturday after a 4-year-old boy tumbled into the ape’s enclosure triggered outrage and questions about safety, but zoo officials called the decision to use lethal force a tough but necessary choice, Reuters report.
Over 2,000 people signed a petition on Change.org that sharply criticized the Cincinnati Police Department and the zoo for putting down the animal and called for the child’s parents to be “held accountable for their actions of not supervising their child.”
Cincinnati police on Sunday said the parents had not been charged, but that charges could eventually be sought by the Hamilton County Prosecuting Attorney. A spokeswoman for the prosecutor did not immediately respond to a request for comment.
Authorities did not identify the child or his parents. The family could not be reached on Sunday. A Facebook page titled “Justice for Harambe” had more than 3,000 likes by Sunday afternoon, a day after the 400-pound (181-kg) gorilla was shot dead about 10 minutes after encountering and dragging the child.
The animal, named Harambe, was a Western lowland gorilla, an endangered species, and the zoo said it had intended to use him for breeding.
“If we think it’s acceptable to kill a gorilla who has done nothing wrong, I don’t think our city should have gorillas,” Manvinder Singh posted on the Facebook page.
A blog post on the website for People for the Ethical Treatment of Animals questioned why it was necessary to kill the gorilla and whether zoos could meet the needs of such animals.
“A 17-year-old gorilla named Harambe is dead, and a child is in the hospital. Why?” blogger Jennifer O’Connor wrote. “Western lowland gorillas are gentle animals. They don’t attack unless they’re provoked.”
Witnesses told local television that the boy repeatedly expressed a desire to join the gorilla in the zoo habitat. Moments later, the boy crawled through a barrier and fell about 12 feet (3.7-meters) into a moat surrounding the habitat, where Harambe grabbed him, zoo officials said.
It was the first time in the 38-year history of the Cincinnati Zoo & Botanical Garden’s gorilla exhibit that an unauthorized person was able to get into the enclosure, zoo president Thane Maynard said on Saturday.
“They made a tough choice and they made the right choice because they saved that little boy’s life,” he said, adding that a member of the zoo’s Dangerous Animal Response Team fired the shot that killed the ape.
Maynard said the team decided to use deadly force instead of tranquilizers to subdue the gorilla because it could have taken some time for the drug to take effect when an animal was in agitated state.
The child was taken to Cincinnati Children’s Hospital Medical Center for treatment of non-life threatening injuries. Hospital officials, citing privacy laws, declined to say on Sunday whether the child had been released or to disclose any details about his injuries.
The Cincinnati zoo was open on Sunday, although Gorilla World was expected to be closed indefinitely. Neither the zoo nor the fire department responded to a request for comment.
Source: REUTERS