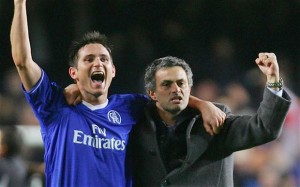 It was confirmed earlier that Jose Morinho will take over from Louis Van gaal as Manchester United Manager and has enjoyed the most supporter from both former teammates and current teammates in the few day.

Frank Lampard who has been under Morinho at Chelsea has backed the Portuguese to bring the ‘X factor’ to Man Chester United and restore the club to former glories.

It is known that the club lost out of one of the most competitive Premier League Campaigns in the previous season.

Lampard believes Morinho will have a “Massive effect at United” as he knows how to get a team winning by putting his own imprint on them.