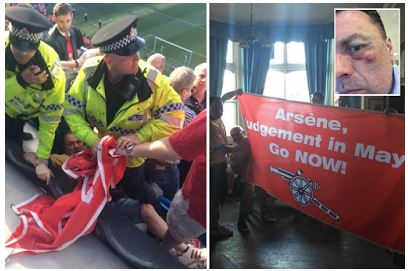 After 40 years as a fan of Arsenal, Frank Graham is turning his back on the north London team, as he fears for the safety of 7-year-old Liam who used to accompany him to games after he was left with Bruises and blood stains for raising up an anti-Wenger banner in last weekend’s game against Man City.

Those who want Wenger out, and express their opinion with flags and banners, are getting attacked by those who remain loyal to Wenger according to Graham.

Graham unfurled an inoffensive flag that a female Wenger admirer took umbrage with, sparking a row that he says led to stewards and police bundling him down to the ground, handcuffing him and slamming his face against a wall which left him bloodied.

Graham,52, has now told The Sun UK that he will stop supporting the club.

“I got the banner out at the end of the game and a girl started trying to pull it down. I was trying to fend her off and get the banner back up but the police and stewards came piling in to me and apparently they got a bit heavy handed.

“I have witnesses who say they slammed me into a wall on the concourse. I work in an office so it’s unsightly. There was blood spurting out and in the end they had to let me go because they wouldn’t have had a leg to stand on. I still might pursue it.The woman who was dragging it down was saying she didn’t want to be associated with it.

In Spain they wave the white hankies and in South America I think you get all sorts thrown onto the pitch. All we are trying to do is get our point across – that we are not happy – to Wenger and the club and we need a change.

“I have been going since 1976 and I am just going to turn my back on them now. We are fighting a losing battle.The whole divide between the fan base is ridiculous. You would not believe how hostile Wenger fans are.

I put on my flag ‘judgement in May’ because that is what he always says when he is criticised during the season. I am judging him in May and I think he should go. It has got tired too quickly”

“The police got me on the ground for showing my banner – I thought we had free speech in this country. Then they handcuffed me.

“I am in my 50s and I don’t need this hassle. I got slammed against a wall, I got blood all down my face and shirt. And then they chucked me out the ground and after they checked I had nothing outstanding against my name – which I don’t as I have never been in trouble before – and that was it.I didn’t take my boy up there just in case there was trouble. It is not unheard of for them to attack children.

“The 14-year-old son of my friend was attacked on Sunday.It is just getting too much, I am not having my boy attacked. My boy is eight in June, I am not putting up with it, I am just not going over there anymore. My face is worst today now the swelling is coming up, I took my boy to school and I was ashamed. 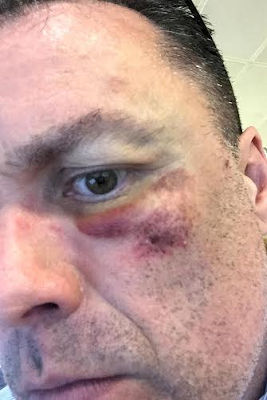 Recalling the 1-0 home draw with Norwich in April when a limp protest flopped, he said:

“I think the club put people in the empty seat because there would have been 8,000 empty seats and I am sure they put planted people in there to start the ‘there’s only one Arsene Wenger’ chant

“It’s the beginning of the end. I put a placard up and so did my seven-year-old boy and he was told to put it down. This is what we are fighting against.It can get really violent over there and it shouldn’t because we are fans of the same team but that is how divisive it is over there.

“When they do the lap of dishonour or shame, as we call it, our plan was for a flag reveal as Wenger walks round but I think they will either cancel it or Wenger won’t be there. I have already given my ticket for Sunday away. I won’t ever go there again. I will end up at Charlton for an easy life.” 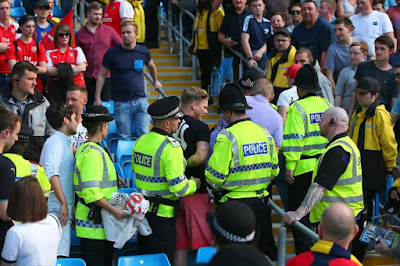 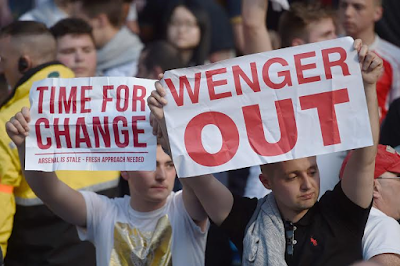 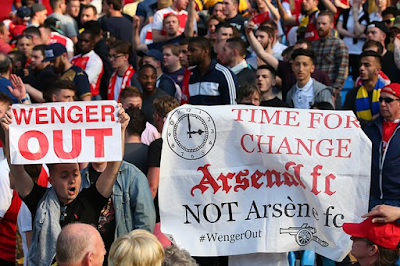 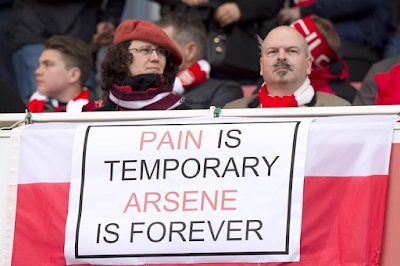