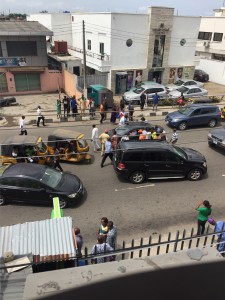 Although the incidence of armed robbery has been on the decline in Lagos state , Bode Thomas street, Surulere remains something of a hot bed

An INFORMATION NIGERIA correspondent witnessed a robbery on the notoriously busy street on Friday morning as an armed robber who was on a motorcycle and had only a fez cap on pulled up beside a black Kia.

As the traffic light turned red, the assailant pulled out a pistol and shot at his victim before reaching into his car to steal a polythene bag reportedly containing money.

The incident occurred at around 11:30 this morning and the victim lost consciousness as the gunshot hit him in the thigh. He was immediately rushed to the hospital by someone at the scene of the accident.

Reports indicate that there was yet another robbery on Bode Thomas street last week.