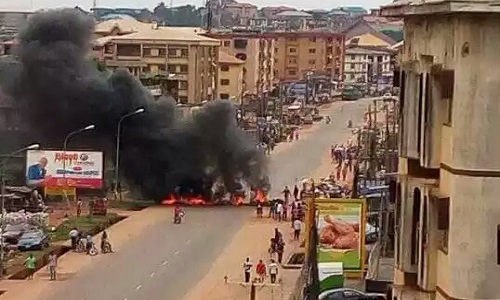 What was supposed to be a peaceful procession on Monday by the Movement for the Actualization of Sovereign State of Biafra, MASSOB, turned into a bloodbath as people suspected to be members of MASSOB clashed with policemen in Asaba, Delta State.
The MASSOB members were marching along Anwai Road in the Delta State capital to demand for the creation of Biafra when they clashed with the policemen, eyewitnesses said.
Witnesses said some persons, including policemen, injured in the fracas, were taken to the Federal Medical Centre, Asaba, for treatment.
According to an eyewitness, Uche Okelue, the incident happened when a team of policemen threw teargas at the MASSOB members in a bid to disperse the procession.
“The police used teargas on the MASSOB people as they were protesting along Anwai Road this morning, so the people got angry and attacked the policemen with knives and broken bottles”, Mr. Okelue said.
“They caught one policeman, beat him up before stabbing him to death; it was a fierce confrontation as everyone ran in different directions”, he added.
Another eyewitness, Ben Onwordi, told News Agency of Nigeria, NAN, that another violent confrontation ensued between the police and MASSOB members at the popular Mammy Market Junction on Nnebisi Road, Asaba.
“As the group were protesting, the police patrol vehicle came behind them and tried to disperse them but the MASSOB people resisted and in the process they clashed and many people were injured.
“The MASSOB people damaged the police patrol vehicle, vandalising the windscreen and doors before all of them fled into different directions”, Mr. Onwordi said.
It was further learnt that another clash occurred at the River Niger Bridge on the border between Delta and Anambra states when some MASSOB members tried to conduct a similar rally.
A police source, who pleaded anonymity, said that MASSOB members had attacked some policemen at the bridge head, overpowering two of them, before throwing them over the bridge into the river.
“We have been able to retrieve one of them from the river. He was brought out in an unconscious mood and rushed to the hospital, however, the second victim is still missing”, he said.
When contacted, the spokesperson for the Police Command in Delta State, Charles Mouka, said the police were still monitoring the situation.
“We are still waiting for information on the incident. As I speak to you now, we are in the field, so I cannot say anything for now”, said Mr. Mouka, a Superintendent of Police.
(NAN)