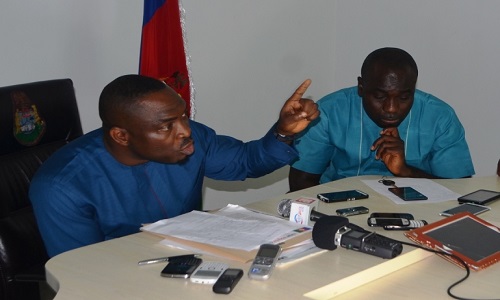 The Ijaw Youth Council Worldwide, IYC, has condemned the nefarious activities of the Niger Delta Avengers, a militant group, which has claimed responsibility for recent bombings in the Niger Delta region.
The IYC spokesman, Mr. Eric Omare, who condemned the activities of the militant group in an interview on Monday, said that Ijaw youths did not see the justification in embarking on destruction of oil facilities and wreaking havoc on the region’s environment.
Omare stated, “We do not see the justification in the Niger Delta Avengers embarking on destruction of oil facilities because Chief Government Ekpemupolo, alias Tompolo, denounced the group.
“I think Tompolo did the proper thing by coming out to inform the entire world that he was not part of the NDA when there were insinuations to the effect that he was behind them.
“As with other cases of attack on oil facilities, the Niger Delta environment and people are the ultimate victims and would suffer from these latest attacks. The IYC believes that irrespective of their grievances, there are better ways of expressing them rather than contributing to the further destruction of the already massively degraded Niger Delta environment”.
On the marching orders given by President Muhammadu Buhari to the security agencies to unmask those behind the Avengers and put an end to their nefarious activities, the IYC said while it did not support the attacks on oil facilities, the security agencies should not use the presidential directive as justification to attack innocent Niger Delta communities.
Omare added, “The security agencies should go after the real culprits and not innocent communities and people in the region. From our experience, the security personnel in a bid to impress their superiors and justify the huge amount of money budgeted for the purpose, always attack innocent communities and people.
“This must not be allowed to happen this time around. We would also advise the Federal Government to be prompt in directing security agencies to deal with insurgent groups all over the country including the Fulani herdsmen who have been killing innocent Nigerians just like they have just directed in respect of the Niger Delta Avengers”.