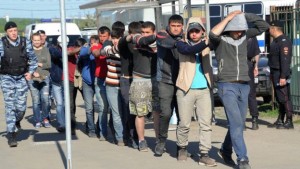 Three people have been killed and 23 taken to hospital after a mass brawl at a Moscow cemetery, apparently sparked by a dispute about jobs, police say. Russian news reports said up to 200 people took part in the brawl at the south-west Khovanskoye cemetery. Police said two of the victims died after being run over by a car as people escaped from the scene.

Police spokeswoman Sofya Khotina said the three people in the car, who were armed with pistols, were arrested.  The brawlers fired guns and fought with shovels, shovel handles, steel bars and baseball bats, Russian news reports said. More than 90 people were arrested, according to police. Reports said police officers fired into the air in an attempt to quell the violence.

Police believe the brawl was caused by a territorial dispute between two different groups of workers, fighting over the cemetery’s lucrative services business. Reports said they were from ethnic groups from ex-Soviet Central Asia and the Caucasus. The Khovanskoye cemetery is a massive 200-hectare (500-acre) site on Moscow’s southwestern outskirts.