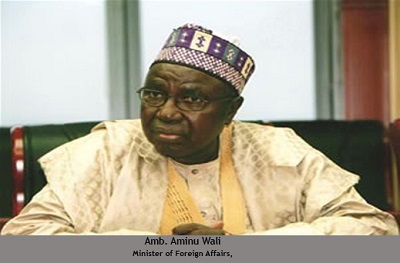 A former Minister of Foreign Affairs, Ambassador Aminu Bashir Wali, has described his ordeal in the hands of the Economic and Financial Crimes Commission, EFCC, as politically motivated.
Wali, who was recently quizzed by the anti-graft agency over the N950 million he allegedly collected from former Minister of Petroleum Resources, Diezani Alison-Madueke prior to the 2015 general elections, spoke in an interview with a Kano-based private radio station, Rahma Radio, yesterday.
The ex-minister, who acknowledged receipt of the funds, said it was sent to the Kano State chapter of Peoples Democratic Party (PDP) by the national headquarters of the party to cover expenses for electioneering activities for the presidential campaign of the PDP.
According to him, as a party stalwart in the state, the national campaign headquarters had sent him the money two days to the March 28 presidential election for the payment of party agents and other electioneering activities.
“It is true I have received N950m in my capacity as party stalwart. Kano is a very big state and we have used the money in accordance with what it was meant for just like other parties have equally done.
“The issue that I am in EFCC’s custody is politically initiated to spoil my good name.
“I have been in politics for over 36 years now and I was never found misappropriating party funds not to talk of public funds.
“Had it been I was accused of a crime committed when I was an ambassador in USA or in China I would have looked at it differently, but this is money sent from the PDP headquarters for presidential campaign and it was apparent that an appeal fund was held and over N20bn was realized”, Ambassador Wali said.
The ex-minister added that EFCC operatives had invited him to answer some questions which he said he did and was allowed to go home.
“I was invited to EFCC to answer some questions on the said money which I did and I have explained everything the same way I did to you, and I am going back to Abuja to continue with my normal activities”, said Wali.