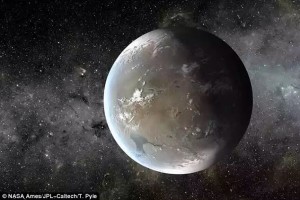 One question that has plagued mankind for centuries is whether we are alone in the universe or if there could be existence on some other plants like Kepler.

Now we could reach a close answer after astronomers have discovered Kepler-62f is capable of hosting life.

Their findings may give researchers hunting for extraterrestrial life somewhere to focus their efforts. 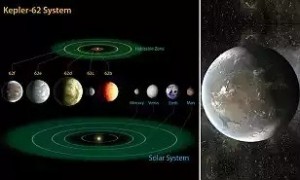 New simulation shows that the planet is the fifth and outermost planet in distance to the solar system, could have liquid (H2o) one of the most important source of life.

It was found that there are multiple atmospheric composition that allows it to warm enough to have surface water, said lead author Dr Aomawa Shields, a University of California President’s Postdoctoral Program fellow. 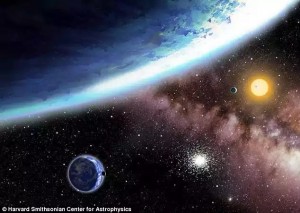 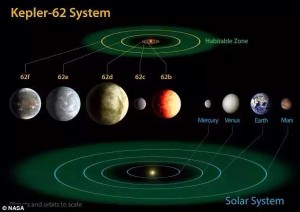 Nasa’s Kepler mission discovered the planetary system that includes Kepler-62f in 2013, and it identify the ‘super-Earth’ kepler-62f as the outermost of five planets orbiting a star that is smaller and cooler than the sun.

The mission did not produce info about Kepler-62f ‘s composition or atmosphere or the shape of its orbit.

To solve this, researchers have come up with possible scenarios about what it’s atmosphere might be like bs about what the shape of the obit might be, to determine whether the planet can sustain life.

They found there are multiple possible atmospheric conditions that could let it harbour water for existence on its surface.

0.04% of carbon dioxide makes up Earth atmospheric condition. Because Kepler-62f is farther away from its star