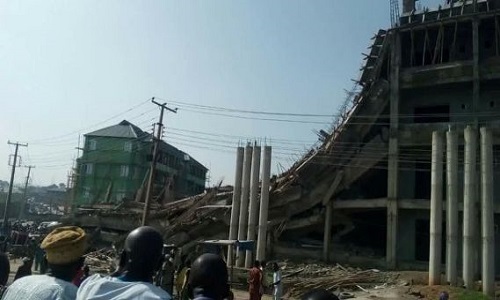 The Ogun State Government has confirmed the partial collapse of a four-story building at Itoku area of Abeokuta, the state capital.
The building, which was still under construction by the state government, caved in on Friday morning, however, there were no casualties, the Ogun Government said.
Speaking at the scene of the building collapse, which was to house several shopping malls, Governor Ibikunle Amosun assured that the cause of the collapse would be investigated.
He also asked the people of the state to remain calm and cooperate with the emergency rescue workers.
Mr. Amosun further said integrity test will be conducted on the other part of the building to determine its fitness.