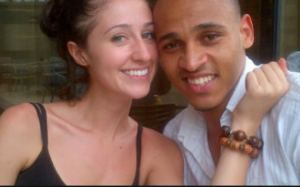 The former West Brom striker took to twitter to share a photo of them both and wrote, “Our 4th anniversary today. Love my wife, mum of my two boys and our little princess due in October!”

Born by a Nigerian father and a Uzbekistani mother, Osaze made his international debut as a substitute in a match between Nigeria and South Africa some years ago.

Happy wedding anniversary to them.