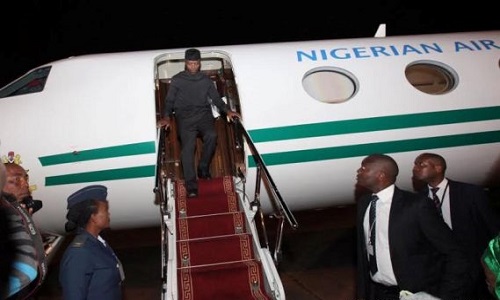 Vice President Yemi Osinbajo yesterday night arrived in Lusaka, the capital city of Zambia to represent Nigeria at the 51st Annual General Meeting of the African Development Bank (AfDB), holding this week.
Mr. Osinbajo, who was in Lagos State earlier in the day where he represented President Muhammadu Buhari at the commissioning and handing over of Patrol Vans, Power Bikes and other security kits to Security Agencies in the State, was received on arrival at the Kenneth Kaunda International Airport by top Nigerian government officials.
A statement by Mr. Osinbajo’s spokesman, Laolu Akande, said the Vice President would among other activities, participate in the high level panel/African leaders round-table on energy and climate change.
Mr. Akande said the session would also feature other African leaders.
The statement said Osinbajo would also speak on the high level panel on Jobs for African Youth-Turning the Demographic Dividend into Economic Dividend.
The vice president is expected to return to Abuja tomorrow on Wednesday.