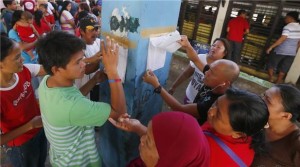 Close to 55 million voters have started casting their ballots in the Philippines’ presidential election that could, for the first time, propel a politician from the southern island of Mindanao to power. This could signal a turn away from the policies of President Benigno Aquino and the political centre in the capital Manila.

Polls opened across the country at 6am local time on Monday (22:00 GMT Sunday) and the election pits frontrunner Rodrigo Duterte, an outspoken mayor from the city of Davao, against four other contenders. Duerte’s strongest challenger is Grace Poe, a freshman senator who is weighed down by questions about her previous US citizenship.

Another candidate Manuel Roxas II, a former senator backed by current Aquino, is battling anti-establishment sentiment, while Jejomar Binay, the current vice president, is facing corruption allegations. Senator Miriam Santiago, a fifth candidate, barely registers in the polls. Duterte, who has faced allegations of human rights abuses and hidden wealth, has anchored his campaign in the fight against crime and corruption in the country.

He said he would declare a “revolutionary government” if criminality is not solved within the first six months of his presidency. The promise, however, raised concerns in the business community and among other political observers, who have warned against the return of an autocratic rule similar to the time of Ferdinand Marcos 30 years ago. But Duterte has endeared himself to voters with his plain, often expletive-laden talk which got him in trouble on few occasions including the time he cursed Pope Francis, made jokes about rape and threatened to burn Singapore’s flag.