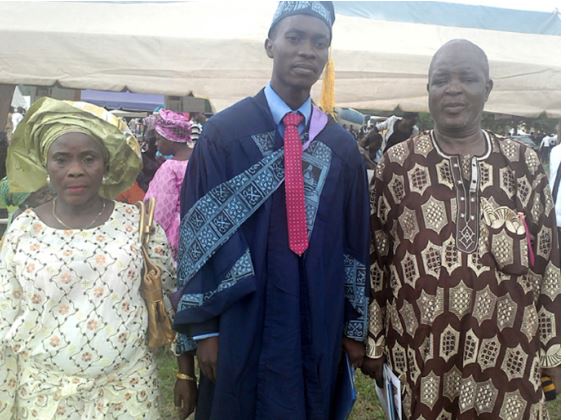 Arowosegbe Michael Aderibigbe, pictured above, the son of a security guard, emerged the best graduating student of the Lagos State University for the 2014/2015 academic sessions. ‎Aderibigbe graduated from the department of Biochemistry with 4.68 CGPA at the school’s convocation ceremony yesterday May 25th.

According to The Nation, ‎Aderibigbe’s father was a member of contract staff of LASU security unit, popularly tagged ‘Campus Marshall’. He however lost his job after he had an accident and almost became bedridden. While giving his valedictory speech, Aderibigbe narrated how he kept his father’s identity secret for fear of being attacked.

“My dad had been here for about five years before I secured admission, but I could not tell my friends because I was afraid of being attacked. So I kept it a secret. I witnessed a protest in 100 Level, where my father was stoned. I could not cry.”

He recounted how his choice of LASU was accidental, having failed a couple of times to secure admission to study Medicine and Surgery at the Obafemi Awolowo University (OAU).

His superb 287 Post-UTME score could not guarantee him a space in OAU.