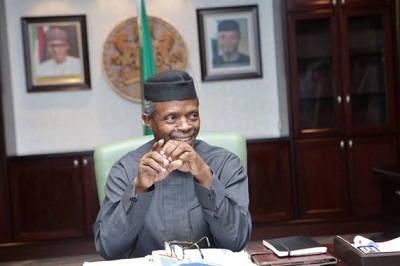 Vice President Yemi Osinbajo on Monday night held a closed door meeting with some stakeholders from the Niger Delta over the current attacks on pipelines in the region.
A new militant group, Niger Delta Avengers, claimed responsibility for the bombings of Chevron’s oil pipelines as well as pipelines supplying crude oil to the Warri and Kaduna refineries.
Mr. Osinbajo first met with some security chiefs including those of the Navy and Army and the Minister of State, Petroleum Resources, Dr. Ibe Kachikwu, and some other government officials.
He later met separately with Governor Seriake Dickson of Bayelsa State and the Amayanabo of Toun Brass, Bayelsa State, King Alfred Diete-Spiff.
Osinbajo, in the company of Dickson and Diete-Spiff, also met with representatives of some oil companies including Shell, Total, AGIP, NLNG and Chevron.