Plane crash-lands on top of a roof in California 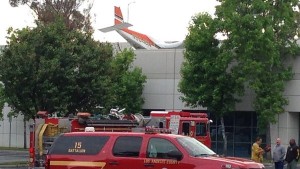 A single-engine plane in California lost power in mid-flight and the pilot was able to make an emergency crash landing — on the roof of a building. The California Highway Patrol and the Los Angeles County Fire Department said drivers in Pomona called 911 about 4:45 p.m. Sunday to report that a plane appeared to be preparing to crash near the 10 and 57 freeways.

The pilot was able to steer the plane, which had been headed for Brackett Airfield when it lost power, toward a rooftop for an emergency crash-landing. “We saw it hit. We saw the impact. We figured it was a roof and it bounced a bit,” Kelly Vella told NBC Los Angeles. “We started going, ‘Oh my gosh,’ and I called 911.”

The 61-year-old pilot, who was the only person aboard the aircraft, was air-lifted to a hospital with moderate injuries including a broken leg and head injuries. He is expected to recover. Eduardo Ramirez climbed a tree when he saw the crash and was the first to reach the pilot.