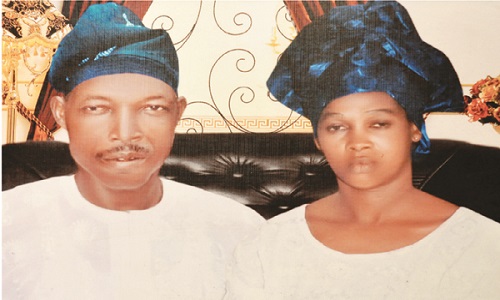 The Lagos State Police Command has expressed fears that alleged wife killer, Jafaru Sogei, may be “mentally unstable”.
Sogei, 49, is believed to have slaughtered his wife of 26 years – Rose – last Friday at their Araromi Street, Oshodi residence while she slept at about 1am.
The suspect was also said to have ingested a poisonous substance after the atrocious murder of his wife and is currently receiving treatment at a police hospital in Lagos.
But the acting spokesperson of Lagos Police Command, Chukwuma Ozoani, said there was possibility that the Sogei is mentally unstable because his speech is incoherent at the moment.
Ozoani, a Deputy Superintendent of Police (DSP), said: “We are carrying out various tests on him. There is the possibility that he might be mentally unstable. He might have psychiatric problem. He is in police hospital; we are checking his mental health. It is an all-inclusive thing. He cannot stand on his own nor speak what we understand.
“He only looks and murmurs and so we are going the extra mile to look at the issues and observe him”.
Confirming the development, a credible police source said it was initially thought that Sogei was on drugs until it was discovered that his poor state of health was due to poison he ingested after allegedly slitting his wife’s throat.
“He was rushed to the hospital and has been there since then. There is a possibility he is mentally unstable. Our psychiatric doctors are checking him. He is not in a good state at all. He took poison. He is not well so we are treating him at the police hospital.
“You cannot investigate someone who is at the point of death. But once he recovers, we would begin investigation into the case”, said the source.