She was accused of fraudulently diverting N13.3m belonging to the record label for personal purposes. 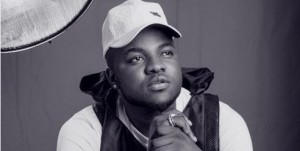 The label in a lengthy petition obtained by INFORMATION NIGERIA dated May 19, 2016 and addressed to the Assistant Inspector General of Police, Zone 2 Zonal Command, Onikan, Lagos, Baseline claims that Skales’ manager, Osagie committed fraud against the company with monies totalling N13,374,000.

See details of the petition below:

1. THEFT OF COMPANY MONIES EARNED BY SKALES FROM MARCH-APRIL 2016
The Company noticed that although Skales was listed as performing at various concerts, shows, tours and other events, none of the monies received from these events was remitted to the Company. In this regard, the Company invited Skales and his manager Teresa Osagioduwa Osarenkhoe to various meetings seeking an account and a reconciliation. At these meetings, both Skales and his manager Teresa Osagioduwa Osarenkhoe insisted that the events in question were not paid events and as such there were no monies to remit. These dubious activities continued for a period of 12 (twelve) months wherein the Company was fraudulently deprived of its legitimate earnings by the said Teresa Osagioduwa Osarenkhoe as payments made for performances were paid directly into her account in violation of the procedure set up for payments at the beginning of the Contract. The Company in March of 2016 decided to catalogue some of the paid shows, performances, concerts and tours wherein Skales performed and the monies were fraudulently converted for personal use by the said Teresa Osagioduwa Osarenkhoe.

By the Company’s estimation, from the aforementioned events, Teresa Osagioduwa Osarenkhoe has fraudulently converted the sum of N7,474,000 from this brief period without accounting to the Company or making payments first into the Company’s accounts as stipulated in the Contract. This is without factoring all the other performances, tours and shows where no remittance was made from the period January 2015 to April 2016.

Given the above circumstances, the Company believes that a fraud has been committed against it by Teresa Osagioduwa Osarenkhoe. 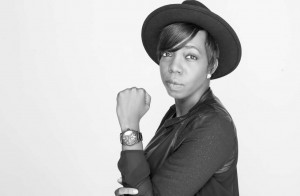 Osagie is a respected talent manager in the music industry who has over the years worked with acts such as Kel, Wizkid, Morell, Sarz, Dammy Krane, Niyola, Banky W and others.

She currently manages Skales signed to label Baseline records, whom she is in the middle of a dispute with.

She could not be immediately reached for comments as at the time of this posts as her phone numbers were unreachable.

She’s however taken to Twitter to dismiss reports that she’s been arrested; 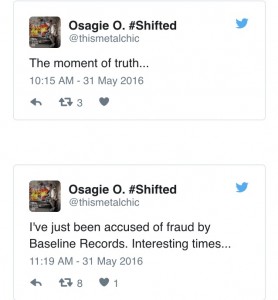 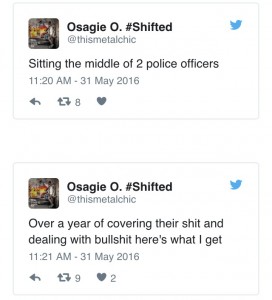 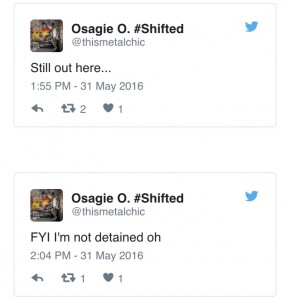