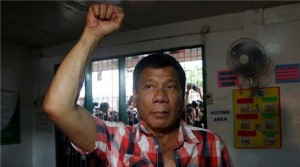 Populist mayor Rodrigo Duterte has claimed victory in the Philippine presidential elections, following the withdrawal of his opponents. Nicknamed “the punisher”, 71-year-old Duterte has promised a relentless crackdown on crime and the overhaul of the country’s constitution.

The Parish Pastoral Council for Responsible Voting (PPCRV) said that with 90 percent of the presidential ballots counted, Duterte had about 39 percent of the votes. The PPCRV is  a Catholic Church-run monitor accredited by the government. Duterte’s main rivals – the ruling party candidate Mar Roxas and Senator Grace Poe – both conceded defeat after polls showed the mayor heading for a resounding victory. Duterte said he accepted the mandate with “extreme humility”.  Al Jazeera’s Marga Ortigas, reporting from Manila, said many Filipinos had grown frustrated during six years under President Benigno Aquino.

“They were years of broad economic growth but that prosperity didn’t trickle down fast enough. Aquino and his administration were criticised as too elite, too impersonal, and out of touch,” she said. Tapping into that sentiment, Duterte, mayor of the southern city of Davao, emerged as the frontrunner by brazenly defying political tradition, drawing comparisons to Republican presidential candidate Donald Trump in the US.

“He made some astonishing claims that in the first three to six months of office he is going to solve major problems, like crime and corruption,” Richard Heydarian of De La Salle University told Al Jazeera. “Of course no experts will agree with him.”