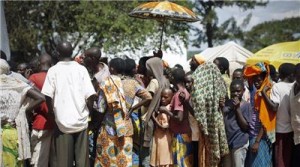 Rwanda has expelled more than 1,500 Burundians in the past week after they refused to move to refugee camps, according to Burundian officials. Monday’s move is the latest sign that a political crisis is testing the already tense relations between the neighbouring central African countries.

Seraphine Mukantabana, Rwandan minister of disaster management and refugee affairs, said on Monday that the expulsions were part of regular crackdowns on those living illegally in the country and were not targeting Burundians specifically.  “We had a number of Burundians scattered across the country who had no documents,” she said.

Rwanda has been hosting tens of thousands of people who have fled more than a year of political violence in Burundi and others who have been there for work, often without formal permission. “They were asked to go to refugee camps or return back to Burundi,” the governor of Burundi’s Kirundo province next to the Rwandan border, Melchior Nankwahomba, told the Reuters news agency. “Those who refused to go to refugee camps were chased … and stripped of their possessions,” he said, adding that they were pushed out by local officials.

Philippe Ngabonziza, mayor of the Burundian town of Ntega, said 1,320 expelled Burundians had arrived since Friday. The governor of the neighbouring Ngozi district, Albert Nduwimana, said they had received 218 people over the weekend. The crackdown on Burundians follows the expulsion of thousands of Rwandans by Burundi since April 2015.