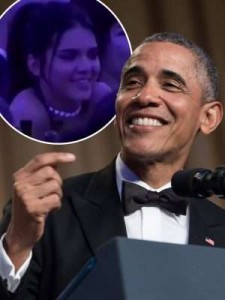 Here how she looks at it, when the most famous president in the world mentions your name during a widely watched speech in Washington D.C then you are someone special.

According to Kendall Jenner, she was indifferent if Barack Obama shaded her or not, she’s just lucky to had been mentioned by the president of USA.

This weekend, the 20-year-old attended her first White House Correspondents’ Dinner on behalf of Rock The Vote and USA Today. During Obama’s last speech at the event, he called Jenner “a nice young woman” but added, “I’m not so sure what she does.”

While others called it a silent diss, Kendall thinks it was the coolest thing ever!

“President Obama told me to say hi to Kim and Kanye,” she wrote on her website after the event. “And then he even joked about me in his speech. Unreal—I was seriously pinching myself!!”